A discussion forum for all the wildlife in your garden

All your bird talk in here
Post Reply
27 posts

Honest Placi (Siynriting) Inc. will be hapy to filful your rekwirements

Honest Placi (Siynriting) Inc. will be hapy to filful your rekwirements

How good is your pigeon english?
Top

It made me giggle to read about scary stick banging against the guttering and catch-rattling, I thought I'm the only one doing that

They are a nuisance, I admit, and they don't seem to be very bright. But I might be totally wrong there since they are doing really well in surviving and adapting to any conditions. Their only saving grace is that they are not aggressive birds, they seem to get on with everyone, birds, humans, other animals ... they are fine with all other living beings, I do like that about them

. Sure, they have a bit of a scuffle from time to time but thats usually just a bit of pushing and wing flapping on the tray, and thats that.
They definitely don't deserve the tag "flying rats" ! It might sound like a conspiracy theory, but I wouldn't put it past the pest control companies for spreading that idea. Yes, they can theoretically pass a certain virus to humans but when did that actually happen? We all know people who had food poisoning (or we had it ourselves) at some point, much more likely than virus passing by FP, but we don't avoid all food shops/eating places

Don't get feral pigeons where I am, just wood pigeons With the ferals those that do get them from what I have read is that they hang on the feeders and the food gets spilled everywhere. Plus in towns and cities where there are huge flocks, it is their droppings that is the main concern. I think most towns and cities now adays it is against bylaws to feed them. In Plymouth for many years there was a trap on top of the dingles building. Those pigeons that were caught were despatched. Plus in the city centre no feeding was allowed.
Top

I'm beginning to understand why the number of ferals arriving in the chateau grounds have increased substantially in recent years. They are being hounded out of the big towns and are looking for a quieter life elsewhere

Willpar has been informed correctly about them swinging on hanging feeders but most of the time they get very little food because it is so awkward for them. I have adopted a slightly more welcoming attitude but I do make sure they don't abuse my hospitality.

I have adopted more welcoming attitude too, I now leave a bawl with food for them on the ground, and they are quite happy to come, eat and go on their way leaving other birds and their food alone

. I used to chase them and try and scare them off, but the more I did that the more determined they were to come and eat. This arrangement suits everyone

. This is a new FP hanging around and he/she is a very nice looking bird 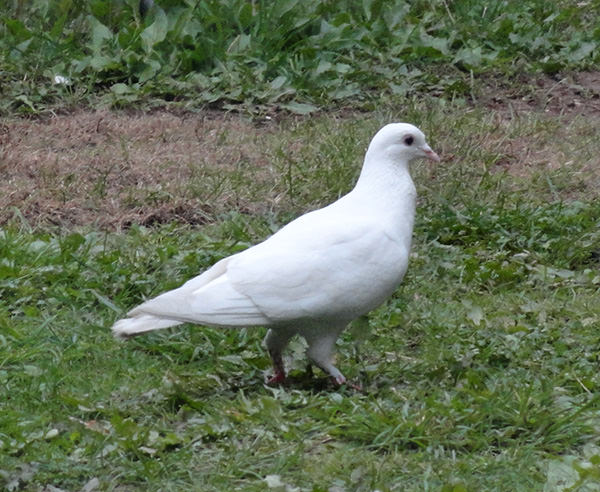